At MGAC, we like to measure our success by the legacy we leave behind. After 22 years, Bruce Bieber, a Vice President here at MGAC, is retiring, and we thought it only fitting to look at the legacy he leaves and the lives he’s touched along the way. We sat down with Bruce to talk about this chapter in his life, telling him we’d like to document it. As is customary with Bruce, someone who’s known for being particularly humble about his work, he told us he thought it would be “boring” but agreed to the interview. What Bruce didn’t know is that we also talked with his colleagues who, unlike Bruce, didn’t hesitate to sing his praises.

Twenty-two years is a long time, and Bruce made the most of every minute. Some people just have a job, a place they clock in and out of. Bruce isn’t one of those people. He brought a sense of purpose and passion to the work each and every day. He made the impossible possible countless times for our clients and never missed an opportunity to make someone’s day along the way. Bruce sets the mark for what we all hope to live up to at MGAC, and he will be sorely missed. That said, the impact of his work will live on for years to come. 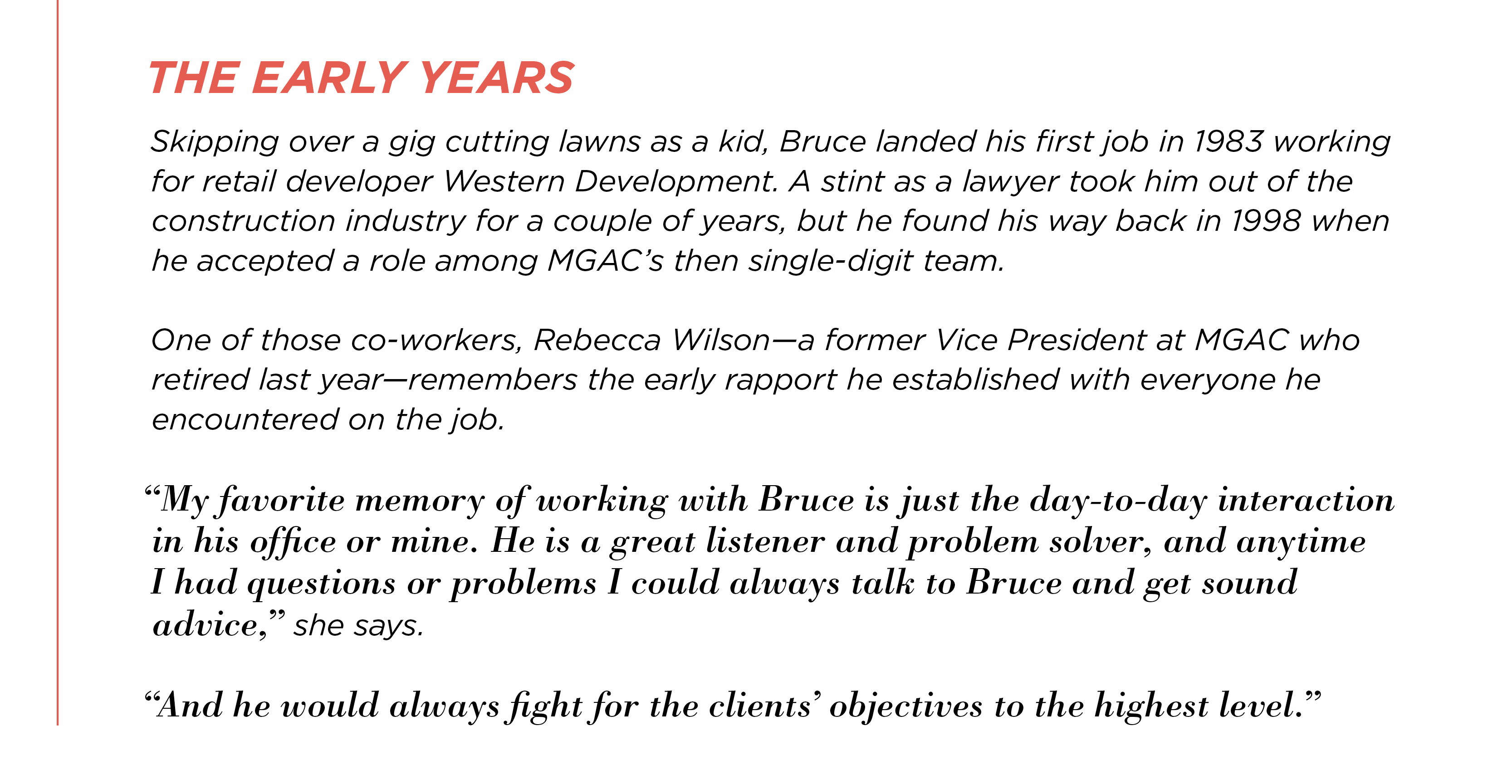 MGAC: How did you get started in the construction industry?
Bruce Bieber (BB): My first job in the industry was working for a retail developer called Western Development, which is responsible for Georgetown Park, Washington Harbor, Potomac Mills, and a number of shopping centers all around the country. I got involved with them in 1983. After five months of introductory clerical / administrative work, I got sucked into the construction side, the industry I ultimately worked in for 37 years.

MGAC: And for a little while you pivoted to law?
BB: Yes. I was working for Western Development and decided to leave after four or five years. I went to another retail developer that built shopping centers. And I applied to law school to go at night. Then in 1990, there was a recession in the real estate industry, and the company I was working for folded. I’d already been accepted into law school, and the question was, do I go anyway? With three kids in diapers, my wife quite heroically supported my decision to go to law school for four years at night, while by day I worked full-time as a project manager for a local general contractor, NARDI Construction. After four years, I got out and got a job as a lawyer for a firm in Baltimore, where I stayed for a year and a half. Then I went to a firm in Gaithersburg, where I stayed for a year.

MGAC: So, what ultimately brought you to MGAC?
BB: I’d been working as a lawyer for two and a half years, but I wasn’t doing the kind of work I’d hoped to do. I got a call from a woman I’d worked with at Western Development. Julia Wright. She was one of the very few people who worked for Mark at MGAC at the time. She said they needed help, and would I meet Mark and have dinner? So, I did.

MGAC: And you took the job?
BB: I did. After dinner, I said, “You know what? I like Mark well enough. I’m going to give it a try.” That was in 1998. There were maybe five other people working there at the time: Greta Perry, Rebecca Wilson, Sue Stout, Julia Wright—all women—plus Mark and I. They said they needed a little help for a few months on Discovery Channel stores, which we were doing around the country. That couple of months turned into ten years working with Discovery Channel. 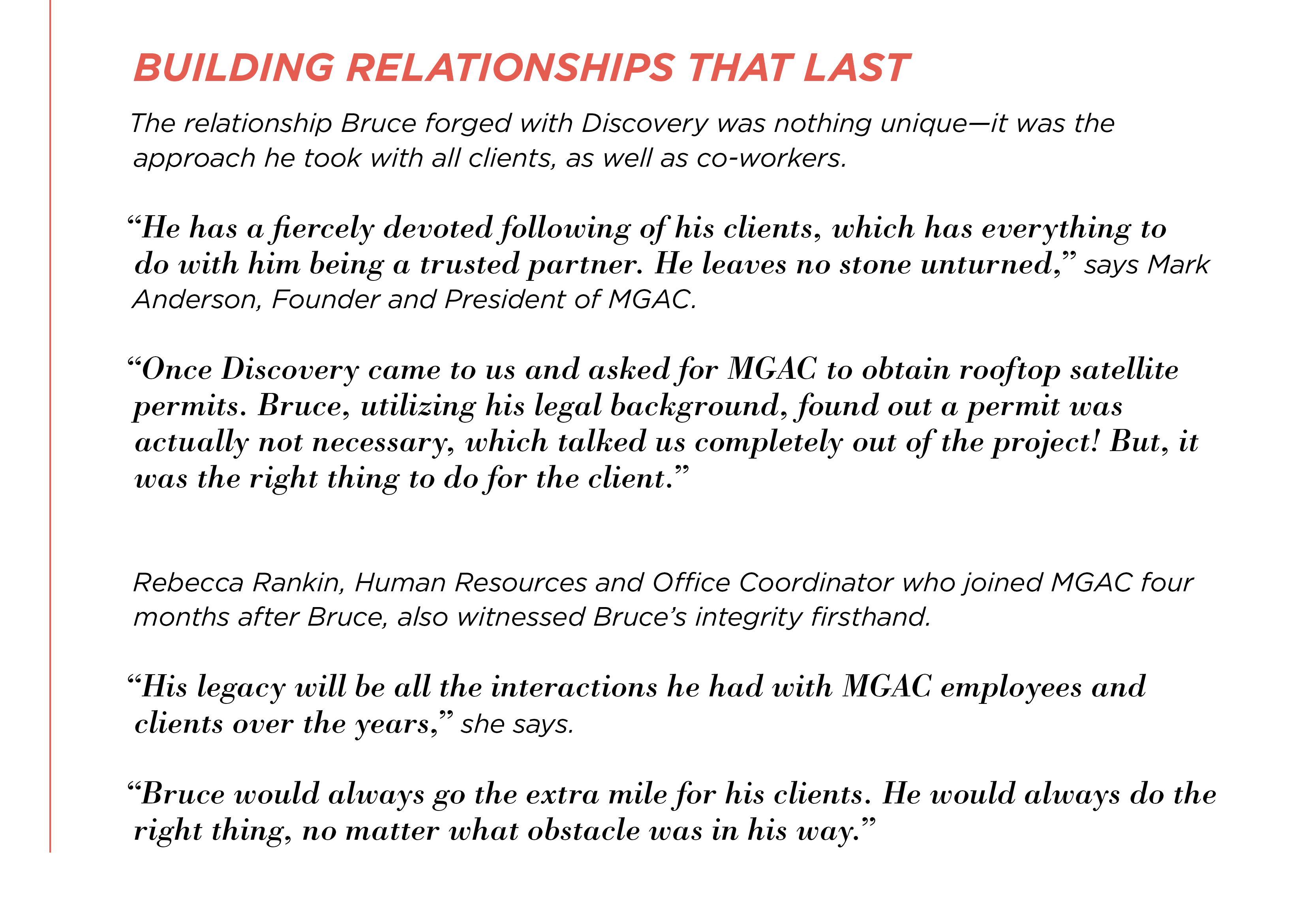 MGAC: What do you consider to be your greatest accomplishment in your time with the company?
BB: I personally think that being able to maintain your peak client business over a decade is an achievement. To continue to be of service and have a client see value in what we do year-after-year is a testament to our abilities and our value. That it’s not a one-and-done, but a long-term relationship.

MGAC: Who were some of those repeat clients?
BB: Other than Discovery, White Star, Hustler Hollywood, Hilton. For most of the clients I’ve worked with, the relationships have gone on for years. It’s both a personal and a corporate value to maintain those durable, long-term relationships. I’m proud of those achievements.

MGAC: You must have some great stories from working with those clients over the years. Any come to mind?
BB: Because I had a law degree and an appreciation for zoning, working on the Hustler account, was particularly interesting. They sold a product that very much implicated zoning regulations. They didn’t want to run afoul of the law, naturally, so you had to be careful where the lines were, what the limits were. (And honestly, most of what they sold you could get at any mall in America. But there’s a bad boy nature of the name and what it conjures up in people’s minds.) So, the zoning authority of the city or county we were in always took a big interest in what we were up to. They wanted to make sure we were coloring inside the lines. To me, it was an actual intersection of design, law, and construction. Strategic design was necessary because sometimes the naughty stuff had to be separated—you had to be 18 or older to go in there—so how do you do that? We had to come up with design solutions to that very issue. How do you build a facility and be sure it complies with all the code requirements? Because people were paying close attention.

MGAC: That’s so true. What other challenges did you encounter working on that account?
BB: There are always challenges. Because it was somewhat provocative and people got excited about it, we had a couple of occasions where we awarded a general contractor to build it and a third of the way through, the drywall subcontractor would figure out who he was working for and quit. He would say, “I can’t work for that guy. I can’t be a part of this.” So, we had to be careful and learn lessons. I told all the GCs after that, “You have to let everybody know. And if they have any problems, don’t bid it.”

MGAC: We’ve heard a funny story about a big box that Hustler gave to the office.
BB: I used to go to an annual retail development convention in Las Vegas with Mark. My admin, Anita—who is still with the firm today working on our FF&E Procurement and Relocation Management team—calls me up and says, “Hey, you got a box from Teresa.” And Teresa is Teresa Flynt, the daughter of Larry Flynt, the founder of Hustler. Unbeknownst to me, with no prior warning or notice at all, she had delivered to our office to my attention this gigantic cardboard box full of all kinds of stuff. It made for a good laugh.

MGAC: What’s another favorite project you’ve worked on?
BB: The Social for Hilton. It was an example of a team—and by team, I mean everyone: the client, many layers of consultants, the architect, acousticians, food service—that clicked on all cylinders, all the time. Everybody wanted it to succeed and made sure they did everything and more to make it happen. I always felt like we were working toward a common goal. And living up to that MGAC mantra of “Have fun. Make money. Do interesting work.” To this day, some of those people will get on a Zoom call and say, “Hey, we need to get the gang together and do that again!”

MGAC: And, you built strong relationships around the office as well. We’ve heard you and some co-workers embarked on some epic motorcycle trips over the years?
BB: There was one legendary trip in particular, when Walt Layton and Harold Bingham and I went out to Sturgis, South Dakota. We spent three weeks, 6,000-plus miles, riding. And Mark helped us do it. We all brought laptops; did a little bit of work on the way. It was a great time.

MGAC: Looking back, would you say there’s a sector within the industry you enjoyed most?
BB: I wouldn’t say that. To me, it’s the people, it’s the team, more so than the process or the product at the end. I really believe that it’s the people, not the thing.

MGAC: How has working at MGAC made an impact on you?
BB: That saying, “Have fun. Do interesting work. Make money,” that’s an old thing. We came up with that many years ago. We really believed it at the time. And I still believe it. Twenty-two years later, that ethos still prevails in my world.

MGAC: How would you describe your approach to the job?
BB: I want every day to have a laugh, to have fun. And I think that, far more often than not, I’ve had fun doing what I do. That’s important to me. I could be a bigger a**hole and have more enemies, and maybe I’d be respected more. But we’re all wired a certain way, and my inclination is to go the route that’s more sociable and less a**hole-ish. That’s a deliberate choice. I feel like MGAC has allowed me to be that person for a long time.

MGAC: Any regrets?
BB: I don’t think I have any big regrets in my career with MGAC at all. If anything, it’s been more than I expected, frankly. It’s been more productive and beneficial to me and my family than I would have ever anticipated. I didn’t think I’d stay there 22 years when I first met Mark. I hadn’t stayed anywhere five years at that point. In that regard, I really couldn’t say that I regret anything.

MGAC: What’s your favorite memory from your time at MGAC?
BB: I don’t think it’s possible to answer that!

MGAC: What will you miss?
BB: I’ll miss the people. There is that energy that’s almost a fourth-dimensional quality when the team is clicking and productive and working. There is a buzz about it that I don’t suspect I’ll have when I’m retired. I’ll miss the energy of a well-oiled, high-functioning team working together toward a common goal.

MGAC: What’s the first thing you plan to do in retirement?
BB: I’m going to move! We’ll split our time between our place in New Hampshire and find something in South Florida, where my kids are.

MGAC: Any advice you’d like to leave behind?
BB: Have fun, do interesting work, and make money. And, in that order.

MGAC: What do you hope is your lasting impact?
BB: That’s curious! It’s funny, I don’t know that I view what I do as having an impact, but I hope people will think of me and what I did and smile. I hope that they’ll have a fond memory or recollection of me. If I can make people laugh and smile, I’ve done my job. 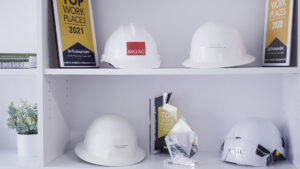 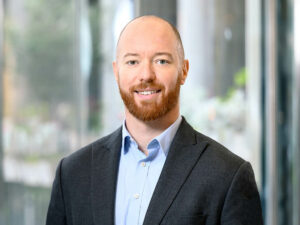 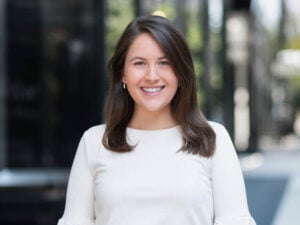 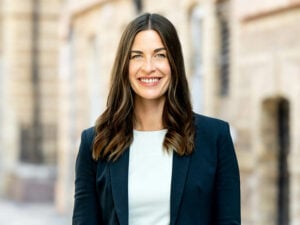 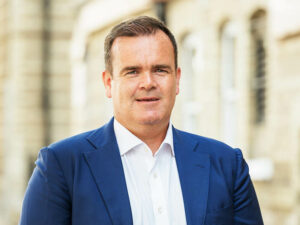 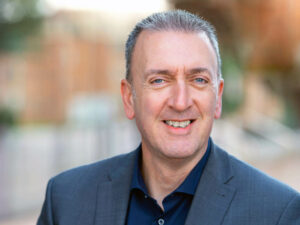