MGAC was founded with the promise to take on the most interesting and challenging project ideas and make them a reality. Getting there is a matter of a million small steps, countless conversations, a multitude of carefully-calibrated decisions that take place between day one and that long-awaited project delivery day. Those are the moments that make a project. We are revisiting them as we delve into the ways our talented, passionate team makes each of our projects possible. Today, we go Behind the Build and revisit our work with NFL Los Angeles.

Leading up to the start of the 2021 regular season, the NFL officially opened the doors of NFL Los Angeles, the league’s brand-new West Coast Headquarters located in the Hollywood Park development in Inglewood, California.

The new league footprint is a big one, with the Class A complex supporting both the business and production arms of the NFL. At 214,063 SF, the building’s office space can accommodate hundreds of daily employees, while 74,922 SF of studio and studio support space quite literally set the stage for state-of-the-art storytelling. The West Coast Headquarters houses flagship operations, such as NFL Network, NFL.com, NFL RedZone, the NFL app, and more. Situated adjacent to SoFi Stadium, the home of the Los Angeles Rams and Los Angeles Chargers, the move from Culver City puts the league closer to the action than ever before. It’s the start of a very exciting chapter for the NFL, and we are proud to revisit the role we played in making it all happen.

Between the project’s high-profile nature, the complexity of a part-office-space part-studio-space headquarters, and the sheer scale of it all, the job required serious expertise. Our team was engaged in 2019 to provide project and cost management services, while the project was in the design phase.

We were fortunate to join an all-star team. As the architects on board for both the base build and tenant improvement work, our friends at Gensler created a design for the headquarters that is every bit as exhilarating as the NFL—and every bit as iconic. Howard Building Corporation (HBC) served as the tenant improvement contractor for the build, laying the groundwork for success. Jack Morton and The Lighting Design Group (LDG) conceptualized the amazing stage and lighting design, while Showman Fabricators provided all the custom fabrication to bring it to life. In addition, Diversified provided audio-visual design for the studios, which was a critical component of the project. AMA Group provided mission-critical HVAC and power design, KGM served as the leading-edge lighting designer, and TMT Technology was the technology designer for the project. The furniture vendor, Sheridan Group, worked closely with Gensler to furnish the space and bring the vision to life. These partners, and everyone on the star-studded project roster, went above and beyond to bring the work across the finish line. As far as project teams go, this was the A-team.

RUNNING INTERFERENCE AND RACING AGAINST THE CLOCK

Given the complexity of work and number of project partners, our jobs as project managers and cost consultants were demanding from the jump. Communication was more critical than ever on this project. On any given day, our team might be talking to everyone from NFL executives to lighting and sound specialists to drywallers. There were contractors and subcontractors, and sub-subcontractors. Needless to say, we asked a lot of questions and held many team huddles to keep everyone on track and all of the plates spinning.

It didn’t take long for something to threaten that careful balancing act. As it did with the world at large, COVID-19 entered our lives in a big way during the project’s design phase. At a time when much was uncertain, the NFL was very certain about ensuring its new home would be a safe one for its employees. In a very real way, we were designing the plane while it was in the air, and the league invested a significant amount into redesign efforts. Everything was reexamined to ensure safety was at the forefront, which prompted adjustments to many aspects of the project, from the air filtration system down to individual workspaces and bathroom features. Navigating these revisions required an all-hands-on-deck effort. There were design edits and engineering revisions, cost considerations, and schedule implications. That last piece was a major factor as we were all working against an immovable target: the opening of the 2021 NFL regular season—one that would conclude with the highly anticipated Super Bowl LVI at SoFi Stadium.

Arguably the most unique—and complex—features of the project were all of the scenic elements. The headquarters is home to five film studios, one podcast studio, and one voice-over studio. The plans for Studios 1 and 2 were especially ambitious. Slated for just under 6,000 SF, the concepts for Studio 1 were massive as the stage was designed to produce over 20 different looks based on angles and sets. Studio 2 was to be even larger, sitting at over 6,200 SF. Everything in these studios was designed to be state-of-the-art with next-generation technology used throughout. If executed correctly, the plan would place the studios among the very best in the industry.

A huge part of making that happen hinged on the super grid. As its name implies, the super grid had a literally large presence—and huge implications. Its primary role is to suspend the many lights required for the eventual “lights, camera, action.” Due to the weight of film-quality lights and the sheer number required, the super grid itself needed to be enormously sturdy (and did we mention large?). We’re talking 12,000 SF with a weight of 120,000 pounds: the poundage of nine full-grown African elephants.

Suspending this grid required coordination with lighting design teams, sound engineers, architects, structural engineers, electricians, and HVAC installers. Its structural integrity needed to be absolute to ensure the safety of those working below. It also needed to support critical scenic needs. Beyond light suspension, the grid played a role in sound control. The studios’ prime location next to SoFi Stadium meant a few things. For one, the sweeping windows in one of the studio’s designs allowed for a can’t-be-beat stadium backdrop to shots. It also meant that sound control was a must. To help direct and control the unavoidable noise from the stadium, the grid was also utilized to house isolators throughout studios one and two.

Along the line, there were change orders, schedule shifts, and significant cost considerations. Our team managed every aspect of the highly complex process through many meetings, phone calls, and careful deliberations. In the end, the grid went up without a hitch, and we were able to celebrate a major milestone alongside the many partners involved in the process.

It wasn’t just the studios that got the star treatment in the headquarters design. The NFL wanted to make its West Coast Headquarters feel like home for the hundreds of employees under its umbrella. Every flexible workspace was thoughtfully planned to reflect the energy and creativity of the NFL Los Angeles team. The entrance was designed to be as inviting as possible to employees and guests with large-scale water and plant features. Roof access for everyone allows for unrivaled views of SoFi, outdoor gathering spaces are ripe for sunny Los Angeles lunches, and an outdoor practice field can be used as a guest player warm-up area, outdoor film location, or special event space.

No detail was overlooked on this ambitious project, and the complexity of the build and the firm timeline kept us all on our toes, always. That made it all the more rewarding when we were able to deliver for a client that cares so much about the future of sports, of media at large, and, above all, about its employees. This one definitely warranted a touchdown celebration. 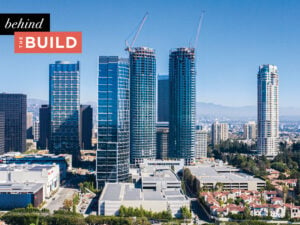